Good evening readers. Well, today's hot topic is the foot, or to put it more precisely, the fetishisation of the feet! I recently stumbled across the youtube channel of GeishaKia, a fascinating woman with as diverse a range of interests and inspirations as you may find, who sees herself as a modern day Geisha, sexual healer and communicator. 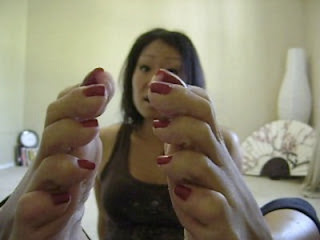 I came across Kia through a short fundraising video posted by a friend on my Facebook page, which was a collaborative piece with Canadian Sexual Healer James Smith. Kia and James are working to raise money to produce a short film entitled "Soul Sex: The Five Gateways to Sexual Ecstasy" which you can find out more about here. It's well worth the time it takes to watch the video and bring some sexual healing to the planet; lord knows we need it! Anyhow, Kia I discovered also has a very successful youtube channel which seems mostly to revolve around her various musings on her feet. Discussions, many shots from many angles, toenails painted and not painted, short and long, manicured and natural, all manner of toe-styling, and judging from the number of hits on her videos, this is no minority fantasy, in fact there's even a dating site devoted entirely to foot fetishees!

Now, I've always known that many people have a fetish for feet, but never quite realised how many. Indeed one of my friends once uploaded, as a lighthearted jest, a clip of her party trick whereby she 'plaits' her toes, one over the other, all five in a most peculiar and double jointed manner. She was amazed by how many hits and comments her video received and it's fair to say, could perhaps have made a more lucrative living out of this party trick! I became fascinated. 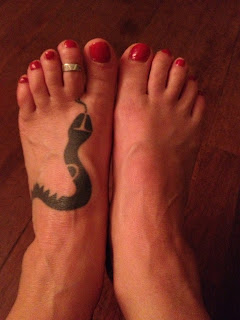 (feet above are mine)

On digging around, I have discovered that it is the part of the body that the far greater number of people will have a fetish about. There are active online forums, there are websites, hell there may even be a 12 step program for all I know and it's not breasts, genitalia, or buttocks. Not noses, lips or tongues. Not necks or shoulders or the delicate curve of a belly, but feet causing all the rumpus. I guess it follows then that the next greatest clothing fetish is going to be shoes and boots and we've all heard of that one hey - "Mistress may I lick your boots clean please?" but what drives a person to become obsessed with footwear and the feet? I'm intrigued? I'd like some brave souls to step in and answer here if anyone should stumble across my blog too. What exactly is it that makes the foot so damn sexy? 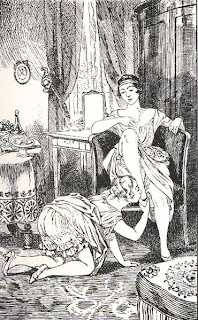 Is it the absolute epitome of worship as the very thing that connects us to this earth? So symbolic that religious mythology would have us believe that Mary Magdalene washed the feet of Christ with her tears as penitence for being a fallen woman. Although it is now widely held that this was in fact Mary of Bethany and that the issue of fallen woman making right her sins is no longer associated with the washing of the Christ's feet, it remains a potent metaphor for redemption. But what of modern day foot fetishists then? Come and share your fascinations. Reveal all, for in the juicy arena of sexual preference all manner of wondrous things lie! Watch Geisha Kia devouring her own feet smothered in peanut butter and jelly; not everyone's cup of tea but pretty intriguing nonetheless. And if you like it there's more on her lovely website here too - enjoy!
Posted by Claudia Bites at 15:49